Well, is is now two weeks since I returned from the Big Apple and the East Coast Custom Knife Show held in the Crowne Plaza hotel on Broadway and 46th. I have been exhibiting at this show for 15yrs - it is the Premier east coast show run by Steve D'Lack.
I took three pieces , a Warnecliffe style Art deco folder engraved by Tim George which sold within the first ten minutes of collectors hour. An art deco dagger which was picked up by Paragon Sports and a small folding dagger with Mosaic bolster and blacklip scales also went quickly.. All in all, my sales were over within an hour of the show opening, which left me free to chat with customers and makers - and to take orders.
The ECCKS is an annual event where I meet old friends and customers and get inspiration from some of the great work on exhibition.
Here is a wonderful dagger that caught my eye. The theme is based on Matisse's Dance of Life.
Created by French maker Pierre Reverde and his wife. I love the depth of artistic and creative research which has been applied to it. Amazing! 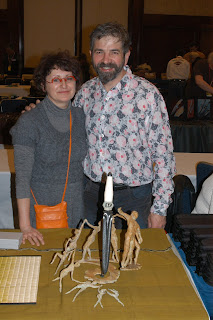 I noted an increased integration of sculpture into the show and was personally delighted by this creative inclusion. Here engraver and sculptor, Joyce Minnick, the renowned Henry Frank, and collector Ralph Malin admire her beautiful bronze. 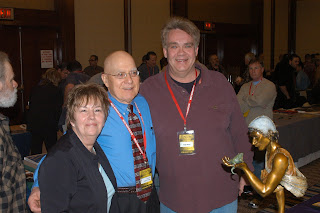 This elaborate dagger by Shaun and Sharla Hansen who had the table next to me, caught my eye. Great lines and creative engraving! 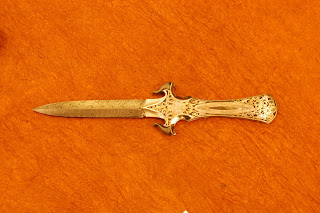 I found another interesting piece on Michael Donato's table. Created by husband and wife team, Scott and Marion Sawby, the integration of Greek and Egyptian influence is quite striking. 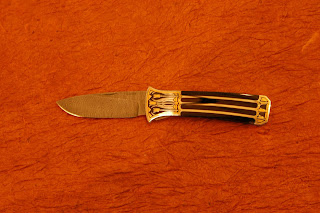 Making it to Joe Culpepper's table to buy handle material is on of the first orders of business. I managed to pick up a couple of sets of great blacklip amongst other goodies. Here I am enjoying the show with old friend and collector Gerald Thomas. I look forward to seing the Thomas's again in April at the new Santa Barbara show. 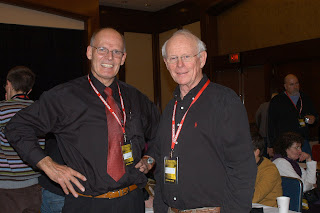 Finally, a couple of other friends. Me, polishing Frank Centofante's pate - one has to be sure to keep everything on show fingerprint free! Engraver Amayak Stepanyan seems amused. 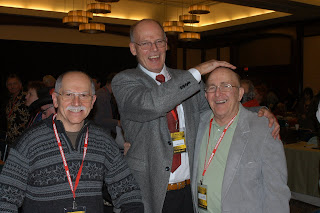 Old friends and collectors Marvin and Julie Yoches who I have known since my first US Guild show - Kansas City in 1982 - in front of my table asking why he cannot have this particular model in fixed blade version. 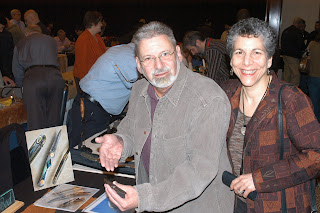 It was great to bunk with Bertie Rietveld from South Africa. I was amused at his last minute assemby efforts - 12pm Thursday evening and still busy with a file! What a perfectionist he is. Anyone who has not seen his work should grab the first opportunity 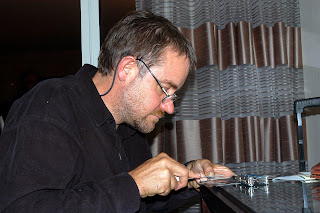 The next OW blog will be a technical piece on herringbone damascus.

Posted by Owen Wood Custom Knives at 6:23 PM No comments: